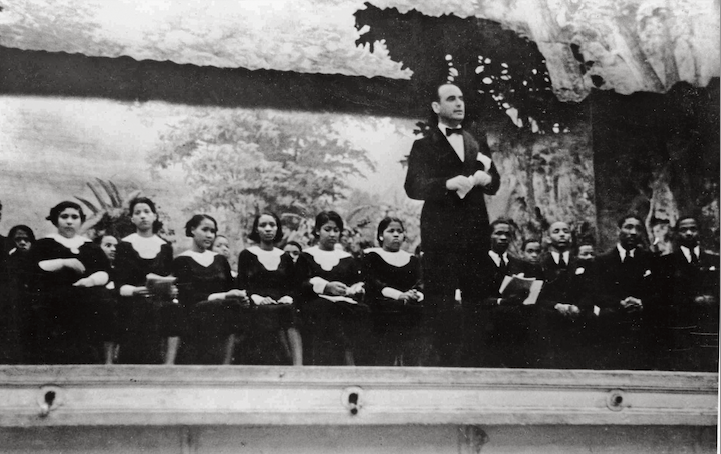 Edgar Stern (speaking at a Dillard graduation ceremony) helped to found both Dillard and its teaching hospital. Although the founding trustees were segregated into black and white boards, Edgar served on both—the only person to do so.

Growth is Longue Vue’s institutional theme for 2023. Selected by Longue Vue staff members, it is a theme with many meanings for us: Growth for our staff. Growth in our audience experience. Growth in income and sustainability. Growth in our partnerships, long-standing and new. Growth in our personal lives and perspectives as individuals. And of course, growth in our gardens. Growth is a principle that crosses every dimension of who we are and what we aspire to be.

Growth is also an ideal that also finds a (perhaps unlikely) model in Longue Vue’s history. Edgar Stern (1886–1959) was born into a life of privilege, and grew to reflect many of the prejudices of his time and circumstances. Edgar entered young adulthood a proponent of segregation as the law of the land. His college writings include arguments for the separation of the “races” in education. Meeting Chicago-born Edith Rosenwald and her family brought him closer to a different perspective. Yet even after Edith and Edgar were married and moved to Longue Vue, Edgar approved keeping the neighborhood exclusively white.

Then over time, his ideas seemed to change. In his words, his actions, and his community investments, Edgar signaled a realization that “separate but equal” was not playing out as promised. He took a leadership role in developing institutions that pursued racial equity in healthcare, education, and housing. He personally breached understood boundaries, including serving on both the “white” and the “colored” Dillard University boards—the only one of the HBCU’s trustees to do so. Indeed, his close collaboration with Dillard’s leadership may have been the first time Edgar had worked so intimately with intellectuals and executive leaders of color—surely contributing to an evolving recognition that the concept of white superiority was pure myth, manufactured to protect the interests of wealthy white Americans.

With Edith, during these years Edgar welcomed African-American luminaries as guests in their home at Longue Vue, intentionally subverting social norms and challenging their contemporaries to rethink assumptions. Throughout this period, he and Edith also began planning for Longue Vue to become what it is today: A place for all people to come together—exchanging ideas, strengthening bonds, and forming community.

Our history is a part of us, and shying away from its harder realities is disingenuous. Yet the very concept of history also promises the potential to change and grow. Edgar grew: in his thinking, and in his formal allegiances. Whatever sparked his growth – whether Edith and her inspirational father (and Edgar’s mentor) Julius Rosenwald, his own personal reflection and experiences, or some combination – we can learn from his openness and his receptive mind. And we can seek to hold our own minds, bodies, and spirits open to growth in the coming year.