Longue Vue was the home of Edith and Edgar Stern, a politically active and philanthropically powerful couple in New Orleans. In recognition of the 100th anniversary of the ratification and adoption of the 19th amendment to the United States Constitution we have created a small exhibit about Edith’s work with voting rights and election-based projects of her and her daughter, Audrey Stern Hess. Please enjoy this excerpt below and come explore more in person in the gardens through the month of August. 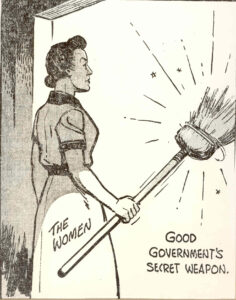 The Sterns played an active role in the 1946 election and administration of de Lesseps S. “Chep” Morrison. Morrison became known during the reform-oriented administration of Governor Sam Jones whose election marked the defeat of the Long political machine. Edgar was an opponent of Earl Long and worked to elect Jones. Soon, he and Edith were busy working to elect Morrison, a young military hero with a reform message.

Edith helped to organize Morrison’s female supporters into “Broom Brigades” who marched on City Hall with brooms bearing the motto, “A Clean Sweep.” They swept Morrison to victory in 1946. During the Morrison administration, Edgar served as Chairman of the Mayor’s Advisory Council. Edith served on the Park and Parkways Commission and New Orleans Housing Projects. Mayor Morrison supported the Voters’ Registration League, a favorite project of Edith. He also supported Edgar in developing Pontchartrain Park Homes. 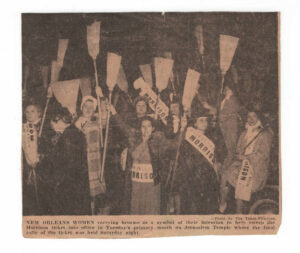 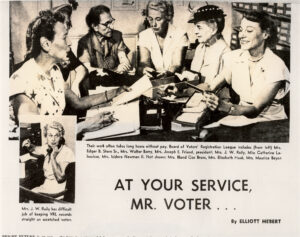 Registering African Americans to vote was an early civil rights struggle, often marred by violence. In New Orleans, the process was supported by Mayor Morrison and the Voters’ Registration League who were founders of his old “Broom Brigade” supporters who swept him into office. The formation of the League was one of Edith’s finest hours, as she noted in a 1973 television interview.

The Voters’ Registration League joined with the League of Women Voters, the Independent Women’s Organization, and the New Orleans Civic Council to enact legislation to reform political corruption at the polls. By 1952, the Permanent Registration Bill was passed, and by 1954, all Louisiana voters cast their votes on modern voting machines rather than in boxes.

League members discovered more than 9,000 improperly registered voters – persons incorrectly listed as disabled or illiterate. This discovery led to investigations by the New Orleans District Attorney in 1950 and the State Board of Registration in 1951. Prior to the state investigation, the League asked for a recall of improperly registered persons. The Registrar was forced to require those listed as disabled or illiterate to appear in person at the Registrar’s office. The number of illiterate and disabled voters then dropped from 9369 to 4075. 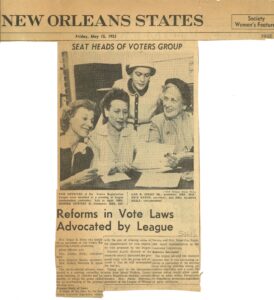 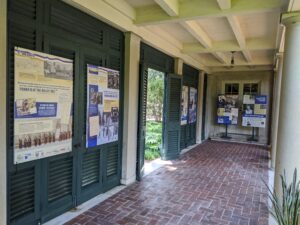 See below for Longue Vue and National Archive exhibition panels 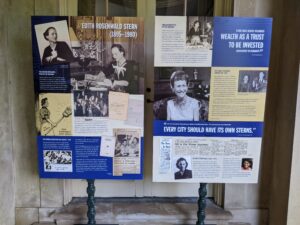 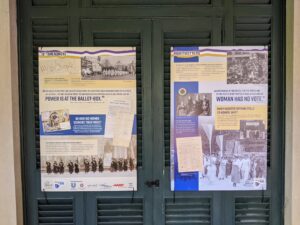 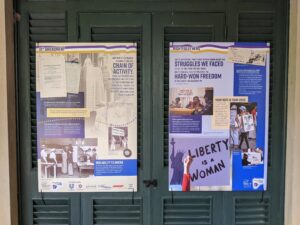 To learn more about women’s suffrage and the 19th amendment anniversary please enjoy these links to other exhibitions local and national.

Shall Not Be Denied exhibition, Library of Congress

Creativity and Persistence, National Endowment for the Arts