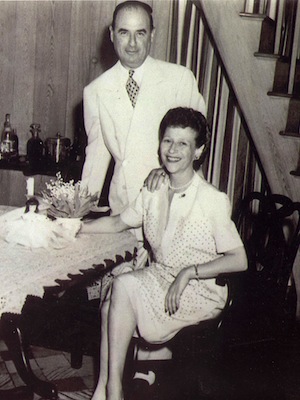 Edgar Bloom Stern (1886-1959) was an established businessman in a cotton brokerage and a former president of the Association of Commerce. He had begun to follow in his parents’ philanthropic footsteps when he met and married Edith Rosenwald in 1921.

The daughter of Augusta Nusbaum Rosenwald and Julius Rosenwald, then president of Sears, Roebuck and Company, Edith Rosenwald Stern (1895-1980) found in Edgar a person who understood her family’s need to give back to the community. After their marriage, the Sterns built a home in New Orleans, which they named Longue Vue after the tea house on the Hudson River where they had become engaged.

Following the examples set by their parents, the Sterns honored their philanthropic heritage of civic responsibility by helping to establish Dillard University and the Flint-Goodridge Teaching Hospital for African-Americans and by working on voter registration reform. They also supported the New Orleans Philharmonic Symphony, numerous artists of all mediums, and many other worthwhile civic endeavors.

The Sterns earned New Orleans’ highest civic honor, the Times-Picayune Loving Cup, awarded to those who give the most of themselves to better the city as a whole. Edgar Stern earned the Loving Cup in 1930 due in part to his role in establishing Dillard University and its affiliated teaching hospital, Flint-Goodridge. In 1964, Edith Stern earned the Loving Cup for her role in promoting education through the founding of Metairie Park Country Day School and Newcomb Nursery School. In 1977, the New Orleans States-Item named them the city’s leading philanthropists of the past hundred years, further noting, “every city should have its own Sterns.”